It's good to try new things. You might be pleasantly surprised if you just apply a bit of courage and forge ahead!

Then again, you might get the bejesus scared out of you, like this poor baby.
Posted by Ophelia at 2:51 PM No comments: 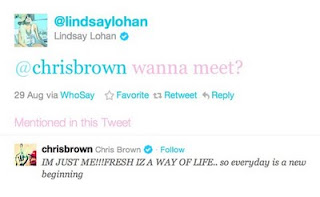 Linds, I hope you'll leave this one a-lohan.
Posted by Ophelia at 2:48 PM 1 comment:

My dad does a lot of random singing around the house, and one of his favorites to croon is 'Gathering Flowers for the Master's Bouquet' by Kitty Wells. Imagine my surprise to discover that not only is Kitty still alive and kicking, today is her 92nd birthday!


Happy birthday, Kitty! I'm sure Larry will holler this great tune extra loud in your honor today.
Posted by Ophelia at 11:25 AM 1 comment:

Pro-tip: Go for a slide

Look at this little fox who has created himself a slide on a conveyor belt! 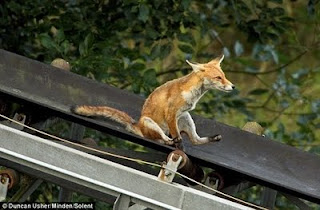 He looks so happy, and like he is having the best time! I'm on staycation starting tomorrow, and one of my goals will be to find a slide and do some quality sliding. You should go for a slide too!
Posted by Ophelia at 11:13 AM No comments:

Jack seems to have gotten... LOST!

In celebrity news, it appears that Matthew Fox, former star of that show on which I wasted six seasons worth of television time, Lost, might be a bit lost emotionally as well. Poor old Former Jack got tanked in Cleveland and tried to board some random party bus, and the bus driver denied him entry since he was not invited to that particular party... and so he punched her in the boobs. And then in the crotch!

Jack, calm down! I bet he thought the bus was an entry portal to get back to the island and craft a decent ending for that damn show. I'm totally still mad about the cop-out Lost ending, can you tell?
Posted by Ophelia at 10:01 AM No comments:

Actual thought I just had

The other night, Sam and I were eating dinner at a bar at the same time as another 'restaurant couple' - a young chef and his wife. They were talking about their fancy upcoming vacation to the South Pacific. The bartender came back down to us after speaking with them...

Bartender: Isn't Cashion's closing for a vacation soon?
Sam: Yep, Labor Day.
Bartender: Are you guys going somewhere awesome?
Me: Ahem. We are taking a vacation... to Baltimore.
Bartender: I'd say that is AT LEAST as exotic as the South Pacific.
Posted by Ophelia at 1:31 PM No comments:

This gem from the interwebs was sent to me by my dear friend Johanna. It's a posting from Boston's 'for sale' section on Craigslist:

A chocolate chip cook in the shape of a antique boot with a flare jean. ten dollars or best offer. its a once and a life time deal. its a rare item. 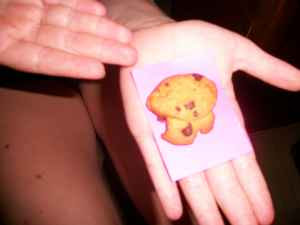 $10 for a single cookie? WORTH EVERY PENNY!
Posted by Ophelia at 9:46 AM No comments:

A not insignificant number of people in my neighborhood seem to have tattoos designed to honor a loved one who has passed on. Just now I was leaving the store, and a young woman by the door had one on her arm that said:

If I had a tattoo to immortalize the day I've had today, it would say:

Overheard at the Eat Place

Customer: What exactly are sweetbreads?
Bartender: They're thymus glands.
Customer: From a HUMAN?!?!?!?!?!
Posted by Ophelia at 11:47 AM No comments:

Someone in Russia fell down

I was just saying last night that I desperately need new running shoes.

Apparently I am not the only one!

Via
Posted by Ophelia at 2:24 PM No comments:

Not too terribly far from my hometown lies a tiny Delta hamlet with a most unusual name: Panther Burn, MS. 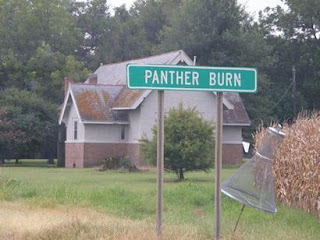 I wanted to share tons of great facts about Panther Burn with you, my dear dedicated 6 readers, but there are just not very many available. All I got was that it's unincorporated but does have a post office, it is on Highway 61, and it is near the also wonderfully named Nitta Yuma and Rolling Fork. I did stumble across some fascinating non-facts on this conspiracy theories website, in a thread titled 'Does Satan live in Panther Burn, MS?' The consensus seems to be that he does not, as Satan would choose to live somewhere much nicer than Mississippi.
Posted by Ophelia at 11:17 AM 57 comments:

From the front lines of interspecies friendships

Here is a chimp named DoDo who has made friends with a tiger cub named Aorn. DoDo is such an amazing friend that he bottle feeds his little buddy!

If there's anything that will make Monday less heinous, it's a monkey in jorts giving a bottle to a baby tiger.