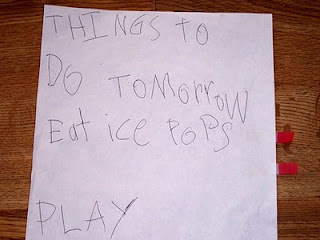 via The Huffington Post
Posted by Ophelia at 3:49 PM No comments:

Labels: things to do

My blogger crush (nerd alert! object of my vague and not too serious affection is a damn BLOGGER!)Gabe from Videogum did a really nice thing by volunteering to fix the poster for upcoming movie Eat, Pray, Love. Good job, Gabe! Very funny - and the commenters versions are hilarious as well. However, I prefer the version created by my brilliant coworker Cassie: 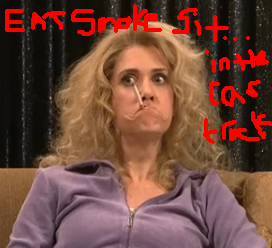 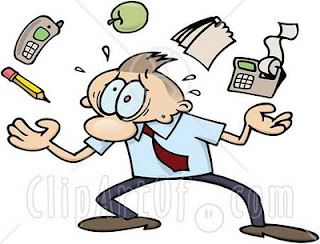 ...but I also discovered the fact that it was titled "Clip Art of an Overwhelmed Caucasian." And now I feel better about life, because I can't stop laughing!

Conclusion - Google image searches are the best.
Posted by Ophelia at 12:55 PM No comments:

On the one hand, as someone who is getting married early next year, this is kind of depressing. On the other hand, as the cynical old harpy I am on the inside, this is delightful and hilarious!

This guy is funny, and I hope he finds a nice new wife who appreciates him.
Posted by Ophelia at 10:30 AM No comments:

Meet the sloths from Amphibian Avenger on Vimeo.

Wisdom from a Coworker

"People of any age can enjoy Werther's Orginals."
-Whitney

I spend a lot of time worrying about being cool. No one wants to be a big dork, right? I never quite feel cool, though, for all the thinking I do about it. Clearly I'm doing something wrong, so THANK GOD this list is here. 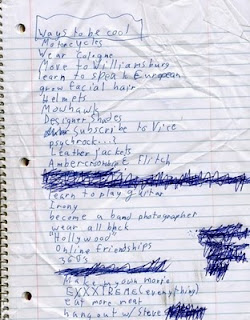 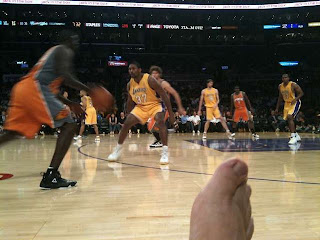 She just keeps hitting home runs with these things.

My best friend sends me the most hilarious Tumblr sites. I don't know how she even finds them, but it's rare she sends me one and I don't have to immediately read it all the way to the end. Enjoy today's installment!

Crazy kids! Stop ruining everything!
Posted by Ophelia at 5:13 PM No comments:

Loyal readers! My deepest apologies for the lack of scintillating posts as of late. Things are pretty crazy in the steno pool these days, making it hard to stay abreast of the latest in Bieber news and other Internet trends. However, I did come across this tidbit with I had to share with you. Read, and ponder: 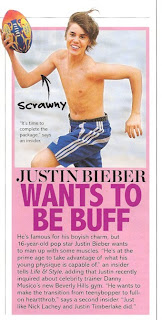 My very dear friend Peter is about to finish his first year of law school! I'm so proud, I could cry! But instead, I shall honor him with a post about a movie line that, back in the day, irked the bejesus out of him.

Remember Garden State? That movie about Zach Braff having the sads because his upper middle class upbringing hadn't really paid off like he'd hoped, and also he killed his mom with the dishwasher? (Ed. note - whoops! Spoiler alert!) There was a line in that movie that really rubbed old Pete the wrong way! It happens when Zach Braff has just encountered Manic Pixie Dream Girl Natalie Portman for the first time, and he asks her what she is listening to. She replies that she's listening to The Shins... and then comes THE LINE:

"You gotta hear this one... it'll change your life."

Well, that just about made Pete lay an egg! "NO ONE WOULD EVER SAY THAT!" he bellowed. "THE SHINS ARE KIND OF CATCHY, BUT THEY ARE NOT GOING TO CHANGE ANYONE'S LIFE!"

Pete, I beg to differ. I've just gotten some breaking news from a trusted source about one Jesse Sandoval. He has recently opened a new business in Portland, selling Mexican food.

I think it's safe to say that The Shins changed his life, because he used to be their drummer, and now he sells sopapillas from a cart.

On the bright side, he seems pretty jazzed about it!
Posted by Ophelia at 2:54 PM No comments:

Uh oh, y'all! I've just been informed that there is a terrifying monster on the loose somewhere along the Vermont-New Hampshire border. I know this because over the weekend, he ate my friend Madeline: 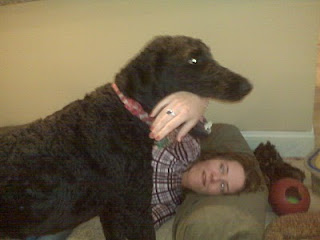 I'm told the monster in question answers to the name Charlemagne. Be vigilant, dear readers, and do not get eaten by a monster.
Posted by Ophelia at 1:18 PM No comments:

Yikes! Luckily Gabe from Videogum has some helpful parenting tips for him. I hope Mr. Busey reads them and takes them to heart, because the prospect of him with a child is truly terrifying! Don't kill that baby, Gary!
Posted by Ophelia at 10:30 AM No comments:

"When large groups of people parade around in public without their pants, amazing things are bound to happen." 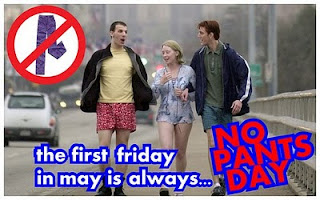 To be honest, I totally forgot it was Cinco de Mayo yesterday, until I was walking home on U Street and there were drunken bridge and tunnel louts stumbling all over the place, being lame, and generally interfering with my get along. I decided to look up Cinco de Mayo on Wikipedia and learn a bit more about the holiday:

"The date is perhaps best recognized in the United States as a date to celebrate the culture and experiences of Americans of Mexican ancestry, much as St. Patrick's Day, Oktoberfest, and the Chinese New Year are used to celebrate those of Irish, German, and Chinese ancestry respectively. Similar to those holidays, Cinco de Mayo is observed by many Americans regardless of ethnic origin. Celebrations tend to draw both from traditional Mexican symbols, such as the Virgen de Guadalupe, and from prominent figures of Mexican descent in the United States, including César Chávez. To celebrate, many display Cinco de Mayo banners while school districts hold special events to educate pupils about its historical significance. Special events and celebrations highlight Mexican culture, especially in its music and regional dancing."

Well that is great! 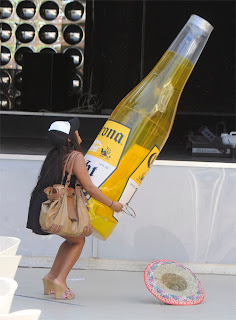 One of my good friends, diva extraordinaire Bennifer McSmelvey, is about to finish his first year of law school. I'm so proud I could cry! But instead, I shall honor him with a post about his fave thing - the noble little creature known as the daschund.

The only thing Bennifer loves more than these funny lil doggies is women, so here is a photo of one dressed up as one of history's sexiest ladies, Pocahontas:

Like all divas, Bennifer loves fashion. I am ordering him this shirt as a gift for all he has accomplished this past year: 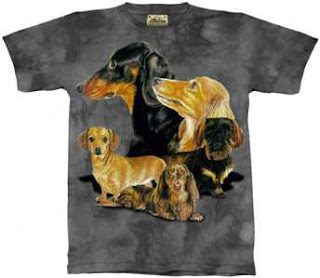 You can thank me later, friend.

Finally, as a salute to your greatness, Bennifer, I have found your Halloween costume for this year. If anyone can work this look, it's you! 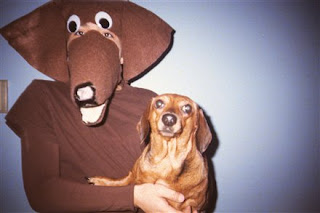 I'm too good to you, really.

Hooray for Bennifer! High fives for life!
Posted by Ophelia at 10:51 AM No comments:

I really, really wish bathing suits still looked like this: 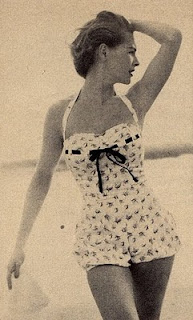 Wouldn't that be nice? The woman from whose webpage I got that image, one "Sally Spark" does not think so:

"People are trying to make vintage swimsuits happen this summer. Sure they look cute in photo shoots but you really have to have the right kind of body for it. Also, I really can’t see anyone wearing vintage swimsuits at the beach, get real!"

Shut up, you stupid trollop! Why don't YOU get real!
Posted by Ophelia at 11:07 AM 6 comments:

Spring in the Southeast Continues to Be Total Crap

Epic WOOFS from middle Tennessee today. Dear readers, all 5 of you, please take time to text RED CROSS to 90999 to donate $10 to victims of the flooding in the Nashville area.

And now, as a palate cleanser from the sads, let's take a moment to remember that when life is full of devastation and garbage, it's important to recognize the pockets of joy that are all around us every day. Like this lil guy here:

Keep on dancing, Nashville!
Posted by Ophelia at 12:40 PM 1 comment:

My good friend and coworker is leaving town

I'm not too pleased about it. I made her a sign to express my feelings: 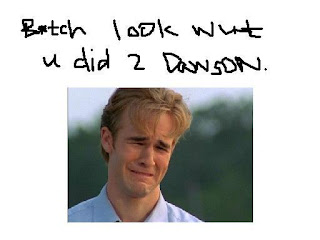 That'll show her!
Posted by Ophelia at 12:53 PM No comments:

Why can't the Gulf of Mexico catch a break?

First Katrina, now a massive oil spill disaster. Gawker has a photo posted of a dead turtle washed up on the shore in Pass Christian, MS, but I'm not going to link to it. It's too effing sad. Instead, let's look at this happy and healthy turtle who is just having a great day jamming on some strawberries: 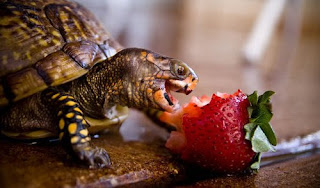 Amazing Things: Hank Azaria on the Set of the Smurfs Movie

I was a massive Smurfs fan as a child, and this photo of Hank Azaria on the NYC set of the new Smurfs movie is SHEER PERFECTION: 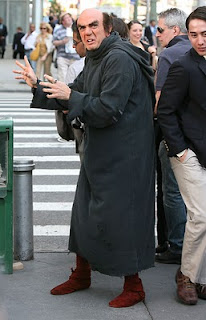 How great is that?! He looks just like Gargamel! I will be first in line to see this glorious film. Well done, Hollywood. Very well done.
Posted by Ophelia at 9:43 AM No comments: