Last night, Sam and I went to a concert with his mother and stepfather.  The venue was in Northern Virginia, and while the music was enjoyable, the place was PACKED with preppy dude bros from the planet Frat House.  I was in line to get a beer - there were six distinct lines at the bar, everyone was in one of them - and there were two such dude bros behind me.  As I got to the front of the line, Dude Bro 1 stepped right next to me and got served first, basically cutting me in line!  So I CUT HIM with my patented Ophelia Bitchface.  Instead of apologizing or addressing me at all, he turned to his friend and said "What?  What'd I do?" and walked off with his beer.  Dude Bro 2 then handed me $5, saying he was sorry his friend was a jerk and buying me a beer was the least he could do.

And that is the story of the time I got $5 solely by giving someone my side eye/lip snarl combo.
Posted by Ophelia at 4:53 PM 2 comments:

There's a gent with whom I went to college whose Facebook posts really stand out because he tends to do them in all caps.  I don't know if it's just me, but things just seem funnier when they are in all caps.  And on the rare occasion he uses normal capitalization, the posts are all the more emphatic due to being out of the ordinary.  Here is a sampling of recent posts....

EVERY TIME I EAT CILANTRO I'M ALL LIKE "DAMN BABY, I LOVE YOU"

CULTURAL QUESTION : WHAT ARE SOME GREAT BOOKS ABOUT INDIA? FICTION AND NON FICTION EQUALLY WELCOMED!!!! THANK YOU

HELLO- I'M INTERESTED IN MAKING A LOT MORE TRIPS TO SKI IN THE TAHOE AREA THIS YEAR. PLS INVITE ME! I'M FUN AND I'LL PAY FOR GAS

I'm just not that into Jennifer Lawrence

Love this guy!
Posted by Ophelia at 4:49 PM No comments:

Here's John Hamm being a ham with a photo of Tony Danza! 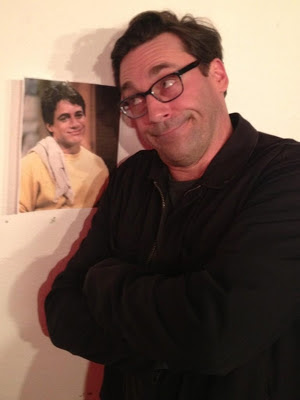 Back in my acting days, I was regarded as being quite the ham myself.  One gentleman at the community theater called me Oscar Mayer because of it.

It's Super Bowl time, y'all!  Super Bowl Sunday is truly a great day to be an American - it's all about cramming your face with meaty, creamy, cheesy foodstuffs, guzzling beers, and watching oversized dudes slam into one another on purpose for sport.  I think Sam and I will be watching at home this year, and I'm planning to make a shredded buffalo chicken concoction in my new slow cooker (officially old: I am deeply excited by my new slow cooker).... but I think he'd much rather be enjoying the game with these guys: 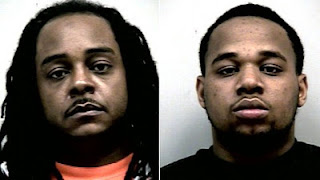 A pair of workers at a frozen food distribution center outside of Atlanta, Ga., made off with $65,000 worth of frozen chicken wings earlier this month, according to cops in Gwinnet County.
Dewayne Patterson and Renaldo Jackson, who both worked at the Nordic Distribution Center, allegedly backed a rental truck up to the back of the loading area at the center and loaded 10 pallets of Tyson frozen chicken wings onto the truck. The pair then made off with the poultry, but were seen by management, according to a police report obtained by ABC News.
Investigators at the Gwinnet County police department arrested Patterson, 35, and Jackson, 26, a week later, on Jan. 23.

Sam loves wings more than most things, and I'm pretty sure these two dudes are now his heroes.  $65,000 worth of wings!  How many people were they planning to feed?  Also, how in God's name did it take the police an entire week to arrest them?

And speaking of things with wings - GO RAVENS!!

New posts are coming, y'all!


HERE THEY COME!
Posted by Ophelia at 1:32 PM No comments:

Only this could rescue my morning

I feel gross, y'all!  But if I suddenly got some coffee delivered from this dapper pup, I'd feel immensely better. 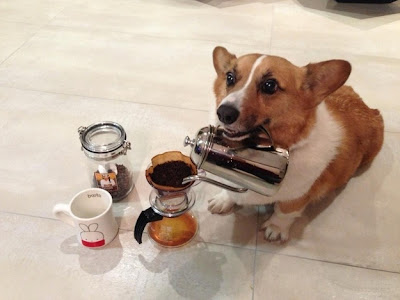