HOORAY! It's spring training time at last. It's only a matter of weeks until you will be sitting in the sunshine, sipping a cold beer, and watching your favorite baseball team play America's game. But whatever goes down during the regular season is going to have to work really hard to top 2011's Most Badass Baseball Moment: 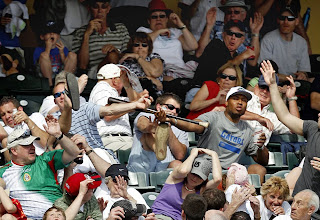 This is Brooklyn's Mitch Davie at a Braves-Jays spring training game in Florida, catching a bat that flew into the stands WITH ONE HAND. All those other losers cowered in fear, but Mitch stepped up to the plate - AS IT WERE - and grabbed that bat like it weren't no thang... and didn't even spill his Red Stripe while doing so. Kudos to you, Mitch Davie! You're an American icon.
Posted by Ophelia at 11:04 AM